Harmonica123.com
Ronnie Shellist began putting out YouTube videos of his harmonica playing and teachings in 2006. At that time, he was the only person on YouTube posting such videos. He began his musical journey in 1995 when he picked up his first harmonica.  Diving in head first, Ronnie began working as a musician in Austin, Tx where he was inspired by the late great Gary Primich and Guy Forsythe. His music and teaching events have brought him all over the US and Canada. He spent 9 months in New Orleans soaking up the music and culture.

Since moving to Colorado in the late 90's, Ronnie has worked with such greats as BB King, Robert Cray and the Neville Brothers.  The 2006 CD "Chicago Sessions", which Ronnie played on, was warmly reviewed in Blues Revue Magazine. It features some great players from Nick Moss and The Flip Tops out of Chicago, IL.   Ronnie was also featured on The Today Show in 2006 for his YouTube harmonica videos. His harmonica channel was voted as one of the top musician channels by YouTube in 2006.

In 2013, Ronnie began working with Hohner Music as not only an endorsee, but also their harmonica clinician. Ronnie has spent 4 years traveling all over the United States putting on Hohner Roadshows featuring performances, demonstrations and teaching seminars from Ronnie. He continues to work locally in Denver CO as a musician and teacher.  He is the founder of www.Harmonica123.com and the most recent endeavor The Global Blues Harmonica Summits.  These summits are online, interactive webinars that feature  top blues harmonica players and teachers around the world. Students have joined from over 25 different countries so far! 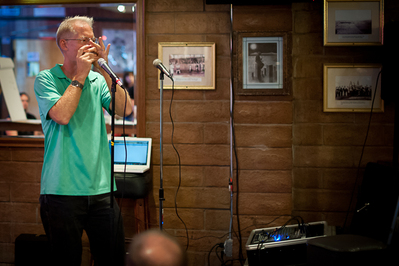 Here's a 2012 music video featuring an original instrumental composition of mine, a joyously funky blues called "Thunky Fing Rides Again."  My approach to the harmonica here--it's played in third position with an unusual and prominent 5 overblow--is one reason this website is called MODERN blues harmonica:
ModernBluesHarmonica.com
A longtime member of the Harlem-based blues duo Satan and Adam, a Living Blues cover story and W. C. Handy Award nominee, Adam Gussow may well be the best-known blues harmonica teacher in the world—a result of his pioneering instructional “Blues Harmonica Secrets Revealed” video series at YouTube.  Beginning in 2007 with his declared intention of “giving it all away,” Gussow went on to create what has now become a more than 500-video channel that now numbers more than 58,000 subscribers and 17 million views.  His sister website, ModernBluesHarmonica.com, is the #1 blues harmonica site on Google.

Gussow’s resume´ includes every sort of teaching environment, from the Guitar Study Center in New York to Jon Gindick’s blues harmonica jam camps (ten of them) and Gussow/Shellist workshops, from countless private lessons to master classes in London and Amsterdam.  In 2010-2012, Gussow organized, produced, and taught at a Mississippi-based event called Hill Country Harmonica, drawing more than 100 registrants from 37 states and 6 foreign countries.  In 2017 he taught and headlined at the National Harmonica League festival in Bristol, UK.  Whatever your skill level, Gussow knows how to assess your strengths, address your weakness, and put you on the road to success!

Currently an Associate Professor of English and Southern Studies at the University of Mississippi with a specialty in blues literature and culture, Gussow was one of the first amplified blues harp players to make overblows a key element of his stylistic approach, adapting Howard Levy's innovations in the late 1980s in a way that helped usher in a new generation of overblow masters such as Jason Ricci and Chris Michalek.  According to a reviewer for American Harmonica Newsletter, Gussow's playing is characterized by "technical mastery and innovative brilliance that comes along once in a generation."

A student of the New York blues harp legend Nat Riddles, an official endorser of Hohner harmonicas for more than two decades, Gussow is best known for his long partnership with Mississippi-born guitarist and one-man-band Sterling "Mr. Satan" Magee as the duo Satan and Adam.  After working the streets of Harlem from 1986 to 1991, Gussow and Magee duo toured internationally between 1991 and 1998.  Their performing credits include the Chicago Blues Festival, the Newport Jazz Festival, the New Orleans Jazz & Heritage Festival, and more.  They toured with Bo Diddley and opened for Buddy Guy, David "Honeyboy" Edwards, Otis Clay, Johnny Winter, and Jimmy Thackery.  They released two albums on Flying Fish Records, including the W. C. Handy-nominated Harlem Blues (1991) and Mother Mojo (1993).  In 1996 Satan and Adam were the cover story in Living Blues magazine; according to editor David Nelson, Gussow enjoyed the curious honor of being "the first white blues musician to be so prominently spotlighted in the magazine's 26-year history."